The Chinese graphic designer Yang Liu has created an interesting book visualizing the cultural differences between East and West. In her book “East meets West” she explains the culture shock she has been experiencing when she moved from Beijing to Berlin at age 14: “I discovered — almost on a daily basis — that things were quite the contrary of what I was used to, starting with social customs and extending all the way to fundamental ways of thinking,” Liu writes in East Meets West, her newest book. With red symbolizing China and blue representing the West, Liu illustrates everything from understandings of the self to uses of umbrellas and attitudes towards karaoke. Drawing from her own experience Yang Liu created minimalistic visualizations using simple symbols and shapes to convey just how different the two cultures are. Yang Liu’s book “East meets West” is published by Taschen Verlag. 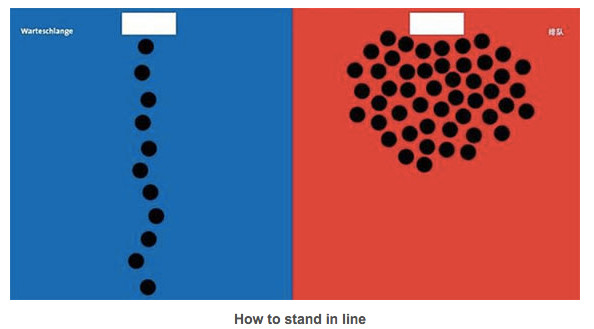